A high-level overview to quickly get you up-to-speed with M2M vs IoT and how 5G will impact IoT advancements over the next 5 years.

A major part of staying ahead in your tech career is staying up-to-speed with the latest advancements in your field. For data professionals, advances in IoT and AI technologies should be in the forefront of your mind. These are the things that will shape the future of our careers.

In today’s post, you’re going to get a cliff notes version of IoT in the era of 5G, with a brief primer of IoT’s peer, machine-to-machine technology. 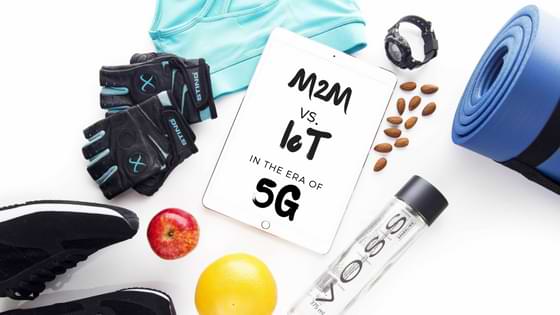 Before we get into M2M vs IoT and how 5G plays into all that, let’s start by clarifying the vernacular.

From the definitions you’ve just read, M2M and IoT sound like almost the same thing, right? I mean, both M2M and IoT allow devices to communicate and self-regulate operations without human intervention.

But let’s look at M2M vs IoT a bit closer for a sec… Two big differences between them are:

Complexity – An M2M device is operated according to the rules defined at the monitoring device to which it’s connected. There is a direct and clear connection between machine operations and the instructions at the central device that monitors it. Like I analogized, one-to-one. In IoT, each connected device can be operated according to any number of competing sets of rules that can be stored in an array of places in the network. For example:

So basically, the way that IoT moderates and controls device behavior is many-folds more complex than in M2M communication.

How much data will the IoT need?

According to this year’s Ericsson Mobility Report, by 2023, 20 billion of the 30 billion internet connected devices will be IoT-connected. Currently, there are about 0.5 billion IoT devices that are connected across cellular networks. Ericsson projects, however, that by 2023 there will be 1.8 billion IoT devices connected across cellular networks alone. That’s a major increase in data usage!

“What type of devises will account for that increase?” I am glad you asked! That takes me to a whole plethora of technologies that enable the AI products and services that we’ll enjoy in 2023, including IoT-connected vehicles, smart household devices (like coffee makers, crock pots, TVs, AVRs), machine meters, and sensor devices. The list could go on and on.

Remember how I mentioned that 5G is much faster and more reliable than its earlier compadres? Well its speed and reliability are exactly what’s needed to take IoT technologies to the next level. IoT devices create tons of machine-generated data.

Since IoT devices use the internet to transmit data to the central control center (and to other IoT devices), faster internet means a better level of service that IoT devices can deliver. With faster and more stable internet, we have the capacity we need to connect more IoT-devices. What’s more, with its increased reliability, 5G is primed to support IoT applications that facilitate mission-critical communications.

Where you can go from here

Unfortunately, we have come to the end of our time here, but let me at least leave you with some next steps… If you really want to take initiative in your career, it’s a great idea to download the Ericsson Mobility Report yourself and quickly get up-to-speed with this data-driven summary of what’s happening across the telecom sector as a whole (I mean, we are talking about the industry that is responsible for transporting all the data that we so love). Share this article with a friend, and for extra points, in the comments below write down what Ericsson Mobility Report takeaways were most compelling to you!

‘I captured this content on behalf of DevMode Strategies during an invite-only tour of the Ericsson Studio in Kista. Rest assure, the text and opinions are my own.’

Lillian Pierson is a CEO & data leader that supports data professionals to evolve into world-class leaders & entrepreneurs. To date, she’s helped educate over 1.3 million data professionals on AI and data science. Lillian has authored 6 data books with Wiley & Sons Publishers as well as 8 data courses with LinkedIn Learning. She’s supported a wide variety of organizations across the globe, from the United Nations and National Geographic, to Ericsson and Saudi Aramco, and everything in between. She is a licensed Professional Engineer, in good standing. She’s been a technical consultant since 2007 and a data business mentor since 2018. She occasionally volunteers her expertise in global summits and forums on data privacy and ethics.

This website uses cookies to improve your experience while you navigate through the website. Out of these, the cookies that are categorized as necessary are stored on your browser as they are essential for the working of basic functionalities of the website. We also use third-party cookies that help us analyze and understand how you use this website. These cookies will be stored in your browser only with your consent. You also have the option to opt-out of these cookies. But opting out of some of these cookies may affect your browsing experience.
Necessary Always Enabled
Necessary cookies are absolutely essential for the website to function properly. This category only includes cookies that ensures basic functionalities and security features of the website. These cookies do not store any personal information.
Non-necessary
Any cookies that may not be particularly necessary for the website to function and is used specifically to collect user personal data via analytics, ads, other embedded contents are termed as non-necessary cookies. It is mandatory to procure user consent prior to running these cookies on your website.
SAVE & ACCEPT
Completion
12%